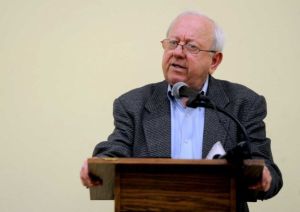 On Wednesday Oct. 15 Bud Welch will be the 2014 Distinguished Speaker in an event benefiting Catholic Social Services Mission Services Dept.

On April 19, 1995, Bud Welch’s 23-year-old daughter, Julie, and 167 others were killed in the bomb blast that destroyed the Alfred P. Murrah building in Oklahoma City.  Welch had always opposed the death penalty, but Julie’s death prompted bouts of hatred and revenge. He longed to see Timothy McVeigh dead, but after months of agony, he realized that nothing positive would arise from McVeigh’s execution. “It was hatred and revenge that made me want to see him dead and those two things were the very reason that Julie and 167 others were dead,” he says.  He also remembered Julie’s comments that executions were only “teaching children to hate.”

The evening is called “Choosing Forgiveness: Finding Solace in Mercy, Not Revenge.”  The talk will be at 7:00 pm at St. Charles Borromeo Catholic Church, 4500 Ackerman Blvd., in Kettering, and will be preceded by a light supper starting at 5:30.