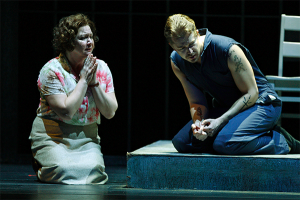 Dead Man Walking is a stunning, thought-provoking opera . . . but in many ways it is so much more.

Before it was an opera, it was a highly lauded, award-winning movie starring Susan Sarandon and Sean Penn. Before it was a movie, it was a groundbreaking, bestselling book by Sister Helen Prejean, member of the Congregation of St. Joseph. But before that, it was a stormy spiritual journey involving a Catholic nun, a murderer on death row, the victims of his unthinkable actions, and society at large. For Sister Helen and many others, it is a journey that continues today.

In fact, the debate surrounding the opera’s main theme is in the news in Ohio and elsewhere in the nation and speaks to our collective view on justice, compassion, the American legal system, and our role as citizens.

At the outset, Sister Prejean was simply following her mission: to provide spiritual help to a prisoner. But her own deeper realization came about as she was confronted with the actuality of how the prisoner’s crime tore families asunder. She also found herself becoming painfully aware of the legal and societal process that put people on death row.

With stunning music by Jake Heggie and a magnificent libretto by Terrence McNally, this opera taps into one of the core issues of our day and the whirlwind of emotions that surround it. Whether you’ve thought about the death penalty or not, this opera is sure to open a path to your heart, soul and mind. After all, isn’t that is what great art is all about?

This is the first Midwest performance of the opera in a decade and a truly rare experience. Don’t miss the Dayton Opera premiere of Dead Man Walking.