Ohioans to Stop Executions mourns the passing of our friend and colleague, Terry Collins, who died unexpectedly on March 17, 2016. The Columbus Dispatch broke the news with this. The Associated Press had this.

The following is a personal reflection by Abe Bonowitz.

I was honored to get to know Terry Collins pretty well in the dozens of events we did together these last few years. Terry was very serious about sharing his first-hand experiences with the death penalty. The only times he ever said no to an opportunity was when he had something on his calendar that he could not move. He was to be the keynote speaker at the upcoming Ohio Death Penalty Lobby Day on April 12, and in fact, he moved something around on his calendar that day in order to be able to be a part of it.

Terry was passionate about the need for broader prison and criminal justice reform – beyond his concern that the death penalty be ended. That normally did not come out in his talks, but in Springfield last year, someone asked about it. He did a time check with me, and I said go for it. He went off for more than ten minutes on how many different ways the systems could be improved, exhibiting rare emotion and even anger at how obvious needed changes are and how oblivious policy makers seem to be.

Terry entered the ODRC as a social worker and ended up in charge of the whole department. He did his job, but I’m convinced he never really believed that executions were necessary or even useful. Terry was a compassionate prison director, as many families of executed prisoners and also the victim families understand due to the way he oversaw their presence at the prison at the time of executions and in the days leading up to them.

It was not long after he retired that Ohioans to Stop Executions director Kevin Werner asked for a meeting with him. He took the meeting and said yes. He worked closely with us literally until his dying day.

Terry spoke together with death row survivor Derrick Jamison at an event this past Sunday at the University of Cincinnati. I remember the first time he spoke at an event with Derrick several years ago. It was both fun and sad to see them together and listen to their banter – a former jailer and his former prisoner – free and working together. 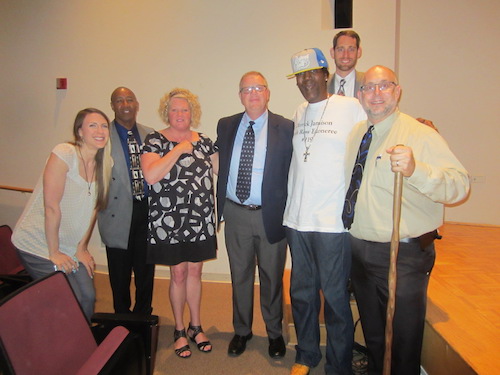 Terry’s remarks were usually pretty scripted, but during Q&A time he would get into deeper observations. On only two occasions that I was present for, Terry shared a story about a conversation with his grandmother. She was unaware of the exact nature of his work until one day she asked him if he was involved “in all those executions down at the prison.” He said yes. Her response: “You know, you’re going to have to answer for that some day.”

I guess that day is today. And I think Terry gets a pass.

There are many other moments worth reflecting on, but this last one stands out in my mind. I was speaking with Terry after his presentation in Chillicothe in October, 2015 was featured in the local newspaper, I was impressed at how pleased he was. Terry was happy not only because we received good coverage on the front page of the local paper, but because he received phone calls from former colleagues – former associates in the prison system – THANKING HIM for saying out loud what they could not.

This is a link to his presentation in Wilmington, Ohio (Speaker Rosenberger’s district) and is pretty reflective of his usual remarks: https://youtu.be/PcQ6Z1vc_oU

Terry also did this work outside of Ohio. He signed joint letters to legislators in other states along with other former prison officials, urgent an end to executions. He joined with the others in a letter to the governor and the head of the prisons in Georgia to urge that prison workers be allowed to opt out of executing Troy Davis, a man who was widely thought to be innocent. I was able to bring him to Delaware, where he testified in favor of repealing the death penalty and tried to help legislators understand that executions have nothing to do with keeping prison workers safe. Just last month, he joined Public Safety Officials on the Death Penalty, and asked us to coordinate the placement of a recent op-ed.

Terry will be happy to be remembered for this work, but he was mostly happy to be enjoying his retirement with his family. Terry’s wife Linda often rode with him to his presentations with us. My heart goes out to her and all of Terry’s family and friends.