Ohio has never conducted a comprehensive study of death penalty costs to the state, but the Dayton Daily News estimates that at least $16.8 million is spent annually. A study is needed to determine how much more costly our state’s capital punishment system really is.

The majority of the death penalty’s high costs never appear as line items in any budget. The costs are buried in the thicket of legal proceedings and hours of time spent by judges, clerks, prosecutors and other law enforcement agencies.

The death penalty is at least three times more expensive than other sentencing options because:

Although a true examination of costs has not taken place, some cobbled information sheds light on the enormous cost.

According to a two-year study by the Ohio Associated Press, prosecutors in smaller counties and defense attorneys and county officials across the state feel that the death penalty squeezes their budgets. Vinton County’s entire court system was shut down for three weeks during the death penalty trial of George McKnight. However, the victim’s family in the McKnight case says they don’t want McKnight to be executed and ask that the Governor commute his sentence to life without parole.

Six months after a month-long capital trial in Delaware County, the prosecutor’s team of 10 lawyers was still working through a backlog of over 500 felony indictments.

The cost of adjudicating a murder case is far more complex than it may appear on the surface. 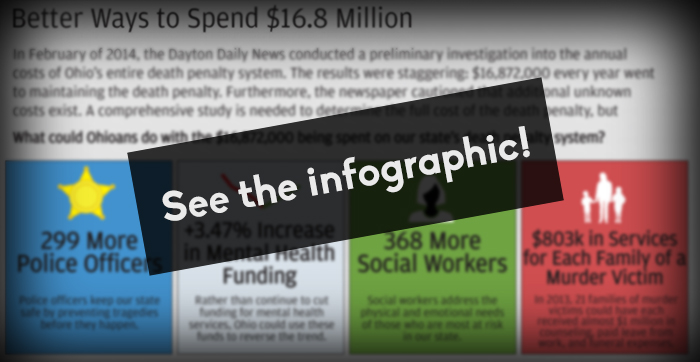